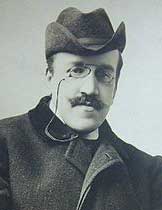 REBIKOV, Vladimir Ivanovich (b. May 19 [May 31] 1866 – Krasnoyarsk; d. August 4, 1920 – Yalta) — after early studies in piano with his mother, and an unsuccessful application to the Moscow Conservatory, R. completed the Moscow University faculty of philology. He subsequently studied at the Moscow Conservatory with Nikolai Klenovsky, a pupil of Tchaikovsky, and then for three years in Berlin and Vienna. Returning to Russia, R. taught and gave concerts in various parts of the Russian Empire: Moscow, Odessa, Kishinev, Yalta, as well as in Berlin, Vienna, Prague, Leipzig, Florence and Paris. In 1909, he settled in Yalta, where he lived until his death in 1920.

As a composer, Rebikov may be regarded as an early Russian “modernist.” He explored such techniques as non-functional harmony, polytonality, the whole-tone scale, and fusions of music with movement (melomimicry) and with speech (melodeclamation—which can be likened to sprechstimme). In many of these areas he was ahead of Western European composers (Debussy, Schoenberg, Satie), who were to become firmly associated with the use of these devices. “C’etait moi, l’avant-garde!” he was known to exclaim.

Rebikov’s engagement with sacred choral music was relatively limited. His Liturgy and ten individual sacred choruses were composed, by the composer’s own admission, under the influence of Tchaikovsky, whose music he adored and emulated early in his career. A personal friendship with Alexander Kastalsky, reflected in a lively correspondence, may have encouraged him to compose his All-Night Vigil (1911), which is the most bold and unconventional piece of sacred music ever written on Orthodox liturgical texts.

The angel cried out

Hymn to the Mother of God at Paschaltide

Selected Hymns from the Divine Liturgy

[The Great Litany] After the exclamation “Blessed is the kingdom”

No. 2 Slava i nyne. Edinorodnyi Syne

Glory now and ever. Only begotten Son

After the reading of the Epistle

After the reading of the Gospel [Augmented Litany]

After the Cherubic Hymn [Litany of Supplication]

The Symbol of Faith

A Mercy of Peace

After the exclamation “Thine own of Thine own” [We hymn Thee]

After the words: “Especially for the most holy” [It is truly meet]

After the exclamation: “And grant that with one mouth”

Praise the Lord from the heavens. The Communion Hymn

After the exclamation “With the fear of God“

Now the powers of heaven No. 1

Cherubic Hymn from Liturgy of the Pre-Sanctified Gifts

Now the powers of heaven No. 2

Cherubic Hymn from Liturgy of the Pre-Sanctified Gifts

Hymn to the Mother of God

With the Saints give rest

Kontakion for the departed

Troparion for the Nativity of the Most Holy Mother of God

Troparion for the Nativity of Christ