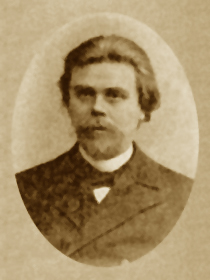 NIKOLSKY, Alexander Vasil’yevich—b. 22 June 1874, village of Vladykino, Penza Region, d. 19 March 1943, Moscow. The son of a priest, sang in church choirs from childhood; 1897-1900, studied at the Moscow Conservatory (composition, conducting); from 1894 until his death was active as a teacher of choral music, music theory, counterpoint, and musical ethnography in a number of educational institutions in Moscow, including the Moscow Synodal School of Church Singing (1915-1923), and the Moscow Conservatory (from 1928). Also active as a musical publicist, author of numerous articles on choral and church music. As a composer, Nikolsky is a representative of the ”New Russian Choral School,” which was centered around the Moscow Synodal School and its Choir in the first two decades of the twentieth century. Among his most important works are the Liturgy of the Presanctified Gifts, op. 23, Liturgy of St. John Chrysostom, op. 31, Major Hymns of the All-Night Vigil, op. 26, Hymns of Passion Week, op. 35, Hymns of Pascha (Easter), op. 37, and the Wedding Service, op. 41. Also prominent are a number of sacred concertos drawn from various psalms. Approximately forty percent of Nikolsky’s sacred choral works are based on chant. His free compositions also make extensive use of chant-like motives. Although he taught counterpoint and fugue (and was a student of the great Russian contrapuntist Sergei Taneyev), Nikolsky’s works tend to favor homorhythmic over contrapuntal writing, often employing colorful harmonic combinations.

Bless the Lord, O my soul

Blessed are they whom Thou hast chosen

Communion Hymn for the Departed

Lord, have mercy upon us

The earth is the Lord's

Sacred concerto for the blessing of a church

My heart is steadfast, O God

How can we not wonder